The beautiful, charming town of Sharon, located in Mercer County, has been on the big screen! The 1988 film “Tiger Warsaw” starring Patrick Swayze, was filmed in the town. This film was directed by Amin Q. Chaudhri and was written by Roy London.

Familiar Sites of Sharon Appear in the Film

In the film, produced by Continental Film Group Ltd., Patrick Swayze plays a man named Chuck “Tiger” Warsaw, who shot his father, turning him into a semi-invalid. After 15 years, he returns home to seek forgiveness from his family.

Notable locations used in the filming include King’s Music, which is now Vaporosity on West State Street in Sharon. This location was changed to become “Tony’s Records” for the film. Crews also utilized the front of the Buhl Farm Park Casino as well as the exterior of Buhl Mansion. The Buhl Casino was founded on a 300-acre farm in the early 1910s by Frank H. Buhl. 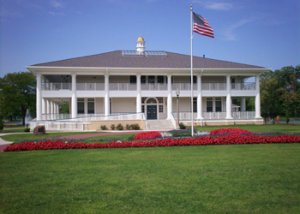 Later Frank donated the farm to be developed as a park for the enjoyment of families in the Shenango Valley.

To depict the interior of a mansion, crews used the former George Boyd mansion at East State Street and Euclid Avenue. For the home of Tiger Warsaw’s family, the crews used two different houses on Columbia Street in Sharon. They used the front and the kitchen of one of the homes and the interior of the other home.

Patrick Swayze fans can enjoy the beautiful sites Sharon, PA, used in the film, and while you’re in Sharon, explore the shopping and delicious food in downtown Sharon! To plan your visit to Sharon, go to VisitMercerCountyPA.com.