Big Dog R/C will host the 7th Annual “Show Down in the Snow” Indoor R/C (remote control) Car Racing event on Sat., December 16, 2017. The event draws amateur and professional drivers from around the eastern United States and Canada who will drive their 1/10 scale cars at scale speeds of over 400 scale miles per hour. Drivers will showcase their talents indoors in Stoneboro, Mercer County PA. There will be more than 12 different classes of RC racing cars on both dirt oval and off-road racing tracks.

“This has become our largest event of the year, regul 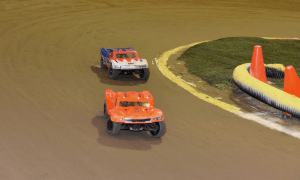 arly drawing over 200 entries from four states and Canada,” said John Raskob, who owns Big Dog RC with his wife, Robin. “We had drivers ranging from 5 to 75 years old, with both men and women competing,” said John. The Park Inn by Radisson, Sharon will be the host hotel and has special pricing for drivers and spectators attending the event. Reservations can be made by calling 724-528-2501. The hotel, located at 3377 New Castle Road, West Middlesex, PA is just 30 minutes from the track and features an onsite restaurant and indoor pool. 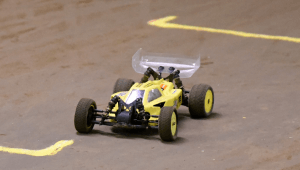 ks and two outdoor tracks, as well as a fully-licensed kitchen and large hobby shop. The shop has planes, boats, cars, trucks, and drones, carrying parts, and supplies as well as providing repair and warranty services.

“It’s a life-long, family-oriented hobby. We have several families who spend their Saturdays enjoying the racing action, and spectators are always free,” said Robin.

The track will open early on December 16 for the event with racing action starting at 1 p.m. Drivers will be competing for custom trophies, along with many prizes and giveaways.

Big Dog R/C holds four large events each year, with the largest being at their Grand Opening with close to 2,000 spectators and participants. They broke the Guinness World Record for the Longest RC Car Jump, and visitors can see the certificate on display at the store. The track is located at 482 Stoneboro Lateral Road in Stoneboro, PA, 16153. The phone number is 724-376-2379.