The Pennsylvania Restaurant and Lodging Association (PRLA) has selected WaterFire Sharon as the Event of the Year for 2018.

Each year this State Association recognizes an exceptional event that contributes to the local community. The selection committee of PRLA felt that the contributions of WaterFire Sharon have been amazing. 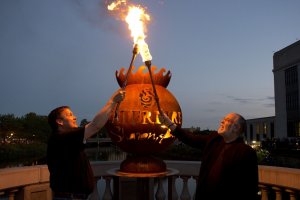 WaterFire Sharon has been a catalyst for cultural and economic activity in downtown Sharon and Mercer County since 2013, drawing over 45,000 people annually. This incredible event has played a major role to inspire and transform the city of Sharon bringing new vibrancy and vitality to downtown. Visitors to the event are attracted from the immediate region, as well as from central PA, Northern/Midwest Ohio, Eastern PA, Rhode Island, and Canada.

The economic impact of WaterFire Sharon is felt throughout the region as restaurants from neighboring cities report lines waiting to be seated and hotels reported full occupancies. Over one dozen new businesses that are centered on the arts (from galleries, culinary stores, to personal consultation/service) have opened in the downtown Sharon area. Many have credited WaterFire Sharon as a contributing factor to their decision to locate in the area. 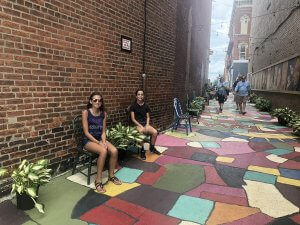 The Pennsylvania Restaurant and Lodging Association represents the hospitality industry in Pennsylvania, specifically tourism, restaurants, and lodging sectors. On Oct. 22nd in the presence of all the major players in the Hospitality Industry, WaterFire Sharon will be honored with the “Event of the Year Award” at the prestigious Masonic Temple in Philadelphia, PA.

Karen Winner Sed and Chip Mastrian co-chairs of WaterFire Sharon state they are humbled by the recognition and honored to be chosen. They credit the work of hundreds of volunteers, a handful of part-time staff and the generous support of the community and businesses for the success of WaterFire Sharon. WaterFire Sharon PA is a fund under the Shenango Valley Foundation, part of the Community Foundation of Western PA and Eastern Ohio.

VisitMercerCountyPA sends congratulations to the WaterFire Sharon Board of Directors, staff, volunteers and all financial donors and supporters for a job well done.