Mercer County, PA – Veterans Day, November 11, provides a special day to reflect upon the sacrifices of military veterans. The Avenue of 444 Flags and War on Terror Veterans Memorial is proud to welcome visitors to their location this Veterans Day and year round. Their outstanding tribute includes an amazing display of 444 flags flying in the wind and 12-foot tall monuments listing military personnel who have died in the war on terror. They are located at 2619 East State Street, Hermitage, PA. 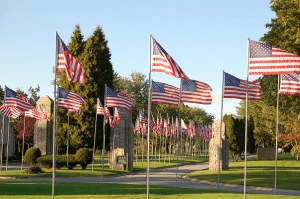 dealing with the Iranian Hostage Crisis. For the first time in U.S. history, an American Embassy was overrun and 53 American hostages taken. As the days, weeks, and months of the crisis dragged on, Americans began to protest. The owner of Hillcrest Memorial Park, Tom Flynn, was tired of seeing the American flag burned in the streets by Iranians, and he decided he was going to do something about it. On day 100 of the ordeal, and with the help of unemployed steel workers in the valley, Mr. Flynn erected 100 American flags. One flag was raised for each day of the hostage crisis to date. He made a commitment to continue to raise one flag a day until the hostages were released. The flag count rose to 444 as the last flag was raised on January 20, 1981 – 444 days after the embassy had been surrendered. Now, 36 years later, the flags still fly as a symbol of the freedoms made possible by the sacrifices of United States veterans.

Mr. Flynn continued his dedication to honoring veterans with the addition 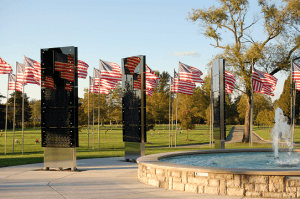 of the War on Terror Veterans Memorial in the center of the Avenue of 444 Flags. The Memorial lists the names of every American service man and woman who has given their life in the War on Terror from 1975 to present. The Memorial is a series of steel and glass monuments, 12 feet tall by 4 feet wide, in a circle around a water fountain. The names of the fallen are etched in chronological order of death, in dark glass, within five panels on each of the stainless steel towers. New names are added after confirmation from the Department of Defense.

The latest effort started by Mr. Flynn is an affiliation with Operation Toy Soldier, a nationwide non-profit program that helps local military families. From this Veterans Day on November 11 and through December 18, you can drop off new, unwrapped toys at the Avenue of 444 Flags office for distribution to children of local military families.